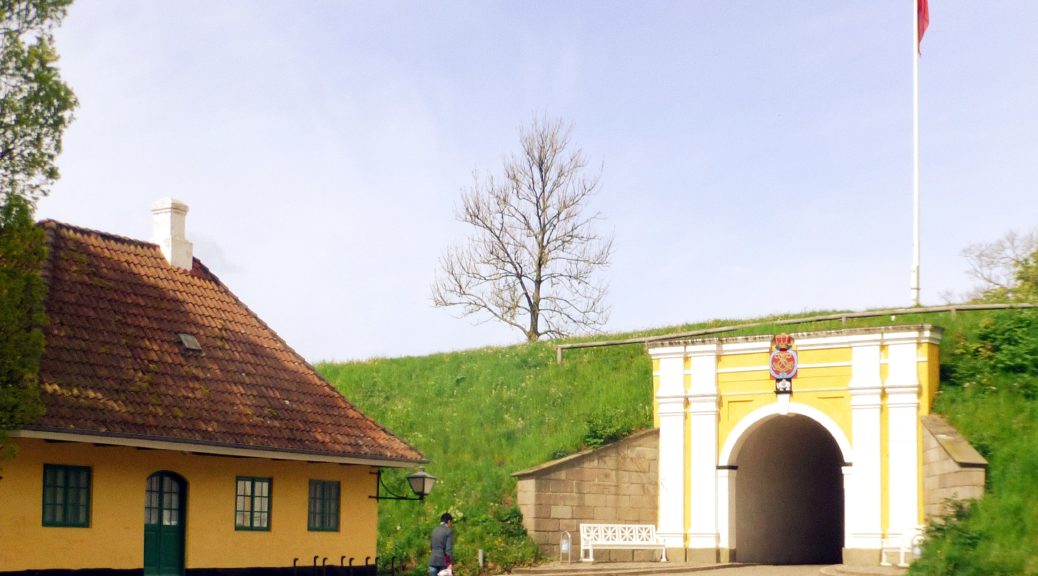 By tradition Danish kings have the names Christian or Frederik. Fredericia is named after one of the Frederiks but which one?

Fredericia is a relatively newly founded town by Danish standards and only about 350 years old. Fredericia was built on the small peninsula Bersodde in the years following 1649. In 1650 king Frederik III signed a document on December the 16th, granting Fredericia market town privileges, which in Danish is called købstadsprivilegier. To help stimulate the growth of the new town, the king granted the citizens the right to build without further permission within the town ramparts, as well as a 10-year tax and duty exemption followed by a period of further 20 years with only half tax. There was a policy of religious tolerance in Fredericia – French Hugenottes were invited to settle, also Jews and Catholics were welcome even though Denmark was a strictly Lutheran realm.

Originally the town was named Frederiksodde but a few years later on April 22nd 1664 the name was changed to Fredericia, it’s present name. Today Fredericia is best known for its function as a railway hub, connecting the main line going north-south with the one going east-west across Denmark. Back in 1650 there were other considerations and motivations. Denmark had suffered from partial occupation by the Swedish troops during the 30 Years’ War and in case of another war would still not be able to protecting Jutland from the strong Swedish forces stationed in Northern Germany. Something had to be done. Frederik III set out to secure North Jutland by establishing a fortress that could also secure the Little Belt and the passage between Jutland and Funen.

The gates in Fredericia are largely intact and the ramparts still encircle the historic city centre, where the streets run perpendicular to each other. For those who have not yet had a pit stop in Fredericia, it is worth considering as Fredericia is an interesting place – the harbour and the beach facing Lillebælt also merit a visit.

I can tell You a little about Fredericia but it is much better to actually go and see for yourself. And there is always the possibility to go on a guided tour. That way you get the main points of interest pointed out and get the explanations and the stories at the same time.

The Battle at Fredericia

As you already know Fredericia was founded as a fortress town so it should not come as a surprise that the town has been attacked several times. The first attack was by the Swedes in 1656-57 and the garrison was massacred. Another important battle is called “Udfaldet fra Fredericia”, the counter-attack of Fredericia, July 6th 1849.

This battle was a turning point of the 3-year war also known as the 1.st Schleswigian War. Denmark was at war with the Schleswig-Holsteinians, present day North Germany which at the time was part of the Danish realm. The royal army was outnumbered, so a garrison was left at Fredericia while the rest of the field army slowly retreated northwards, with a large part of the attacking army in pursuit. Schleswig-Holsteinians laid siege to Fredericia ramparts and the outlook for the barricaded, outnumbered Danes inside the fortress was poor. A number of officers under the leadership of General Rye had come up with a devious plan however. The Danish army with several thousand retreated northward to the Helgenæs peninsula, where entrenchments had been prepared at a very narrow place, easy to defend, hard to attack and with deep water near the coast. The personnel was shipped to Fredericia and even though the Schleswig-Holsteinians outside Fredericia were aware that something was going on, they had no idea how strong the reinforcements actually were.

The Danish generals decided to counter-attack at night, which was completely unheard of at the time. Under the cover of darkness, the Danish soldiers attacked the Schleswig-Holsteinians, who were unprepared. There were heavy losses on both sides, but the surprise attack turned into a victory. The besieging army had to withdraw further south and the thousands of soldiers standing before the entrenchments at Helgenæs were in grave danger of being cut off and destroyed and consequently also made a hasty retreat.

Unfortunately General Rye fell during the battle. To honour him, even to this day whenever a Danish soldier is killed in action, it is said that he has joined the brigade of general Rye. Streets are named after the general in 7 towns and in Fredericia a square is named in his honour.

One of Fredericia’s landmarks is the statue of the brave private called Den Tapre Landsoldat. It stands in a small square just outside the gate Prinsens Port outside the ramparts. This is in honour of the common people and the individual soldiers who risked their lives in this battle. If you visit Fredericia on July 6th, you can expect historic parade with actors dressed as soldiers and burghers in 1849.

The Past is No Foreign Country in Fredericia

When you walk the streets of Fredericia and read the street signs, you will see names such as Bülow, Rye, de Meza and Lunding. These are the names of the four most important generals and military personel from the war of 1848-1851.

I find it fascinating that a town this young holds so much history – and that the history is so present in everyday life. If you like history and military history in particular, Fredericia is the perfect town to visit. Perhaps the ramparts are most impressive as they are amongst the largest and most well-preserved ramparts in Northern Europe. The ramparts are complete with moats, cannons, bastions and ravelines, but today they form a peaceful and beautiful setting around Fredericia’s city centre. It is now one of the largest public parks in the country.

The Ramparts of Fredericia

The ramparts are a sufficient reason to come and visit Fredericia. Today the former fortress is one of Denmark’s largest parks. You have almost 16 km of paths that go round, across, through and along the ramparts and provide ample opportunity for walks and to explore. In recent years the number of trees on the sloping lawns is increasing, but when the ramparts were still part of a fortress, obviously there were no trees. After 1864 the fortress was obsolete, so it was decommissioned in 1909.

In 1917 the ramparts got a Grade A listing. Today the ramparts are a good place for a family outing whether for the youngest who might want to just play or for the adults who can better imagine how Danes in the past fought here to protect their country. If you would like to hear more about the fascinating history, I suggest that you go on a guided tour so you can gain the most from your day out.

There is a lot of history to be revealed behind the Fredericia ramparts. If you hit the right day you can even experience the history reenacted. A group of volunteers called Borger 1849, Citizens of 1849, is a group of Fredericians with a keen interest in history who help to bring alive Fredericia’s history with reenacting it. They give performances of what people looked like in Fredericia in 1849 at the time around the battle of Fredericia. If you want to be sure to see the parade of Borger 1849 in their beautiful costumes plan to visit on July 5th or 6th as they parade the streets of Fredericia.

You can also experience members of Borger 1849 in other contexts, when they show their historic costumes to help convey the city’s history. You have ample opportunity when cruise ships call at the port of Fredericia or during events such as the Tall Ships Race. If you want to experience the history of Denmark brought to life, the Borger 1849 and Fredericia can definitely add to the experience.

Much More Than War History

Without a doubt history plays a central role when it comes to experiencing Fredericia. But the town has so much more to offer besides to the history of wars and the ramparts. Modern Fredericia is an expanding town with new initiatives popping up all over. At present around 51,000 people live in Fredericia and the population grows constantly. The explanation is economic growth.

A place where you can clearly see the urban development of Fredericia is by the harbour, where the central part is the new district Kanalbyen, the Canal Town. When King Frederik III founded the town, he had an ambition to integrate canals like in Venice. Among other things you can also find several good restaurants in Kanalbyen in Fredericia and one of them is already a Michelin restaurant, the restaurant Ti Trin Ned, Ten Steps Down, which received its one star in 2017.

The port of Fredericia also adds activity. The arrival of cruise ships have become a big thing in Fredericia and when cruise ships arrive at the port Borger 1849 will give the guests a colorful welcome. Fredericia lies amidst beautiful nature by Lillebælt, the Little Belt with a fjord and the harbour is deep enough to make it a preferrred port of call for the large cruise ships. The nature park Natur Park Lillebælt is one of Denmark’s largest nature parks and as the Lillebælt strait offers great variety with both shallow and deep areas it provides good conditions for the world’s densest population of porpoises.

Watch the Little Belt Strait From Above

Let’s end our tour of Fredericia from above. Because of its location Fredericia it has two bridges across the Little Belt. The newest bridge is undoubtedly the busiest as it is a motorway, but on the old bridge you can bridge climb. You can walk along the top of the bridge at a height of 60 meters. For reasons of safety this is only allowed in formalized groups. From the top of the bridge you have a great view of the new bridge, the rest of the Little Belt, large parts of the island Funen and a nice view into the peninsular Jutland. You must be moderately physically fit to climb the bridge as you will walk a total of close to 2500 meters and climb a lot of stairs. But it is definitely worth a visit. While on the bridge you are clicked onto a wire. Safety is important while your guide talks about history, the architecture of the bridge, how it was built and about the surrounding nature and while you enjoy the amazing panorama.

Bridge climbing is a good way to end your day in Fredericia, but if you can cope with just a bit more culture, I suggest that you continue on to Middelfart and finish your day at the CLAY Museum of Ceramic Art. In the “Treasure Chamber” you can admire the world’s largest and finest exhibition of royal Danish porcelain. Furthermore has on show ceramic works of art by Danish artisans – and not least you can enjoy a nice cup of coffee or tea in the café with yet another relaxing and beautiful view of the Little Belt.