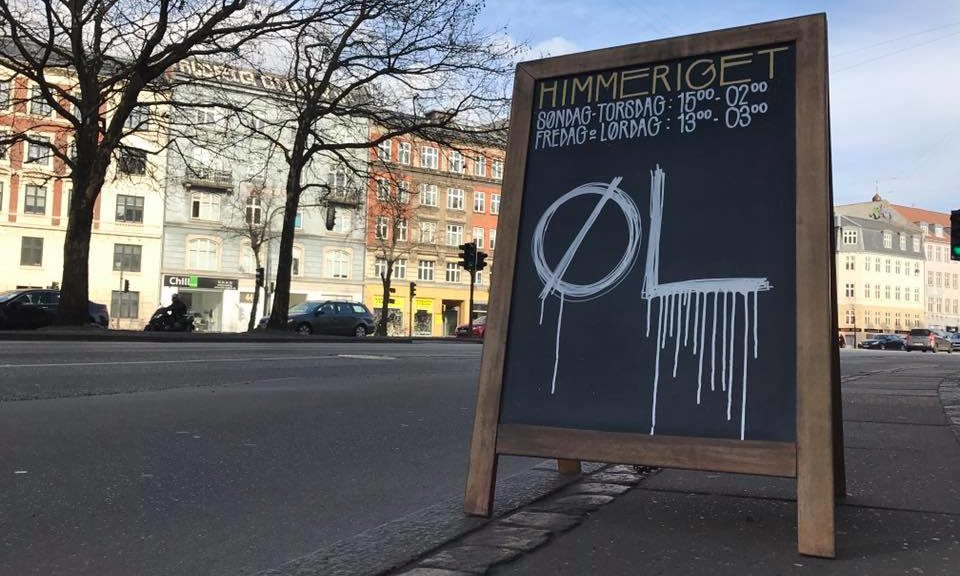 Today, one should consider Copenhagen a capital when it comes to tasty beer. 20 years ago Denmark was not playing Premier League beer wise, but today Copenhagen is a prime destination for beer tourism and the city has plenty of watering holes where you can soothe your palate. Until recently, the market was dominated by near monopolies, lager, gold-beer (a particularly strong lager) and hardly any other type of beer. Today Denmark is a diversified Beer-country and Copenhagen is its capital city.

20 years ago, Copenhagen beer enthusiasts could only find interesting beers in Cafe Griff in Griffenfeldtsgade or just round the corner from it in Nørrebro at the bar Ølbaren in Elmegade – and here we are talking about beer at beginner’s level only, such as Guinness, Franciscans, Leffe and the like whereas today the variety is much greater and of a better quality.

Den Tatoverede Enke, the Tattooed Widow, in Boltens Gaard specialises in Belgian beer, including beer for truly hardcore enthusiasts, such as gueuze and lambik, the wildly fermented, sour varieties which were rarely found on Danish soil in those days.

The beer bars still remain, but Cafe Griff and The Tattooed Widow have long since passed on to the eternal hunting grounds of true beer lovers. Today we have some 50 specialized beer bars around Copenhagen. Some of them are at the very top of international levels.

The First of Its Kind in Europe

Denmark was the first country in Europe to embrace the beer revolution about 20 years ago. Forty years ago, consumers and brewers took to the barricades in The States, demanding better taste, and the revolution took off. At that time, there were about 100 breweries in The States and if it was at all possible they brewed even more dull and uninteresting beer than the Europeans – including the Danes.

Today, the number of breweries in The States is close to 9000. In Denmark, there were 10 breweries, among which Carlsberg, Royal Unibrew, Vestfyen and Thisted, when the Brewers’ Association published their 100th anniversary edition in 1999. Today, little Denmark has approximately 230 breweries.

The breweries are spread around Denmark, but you will find their beer and the best taste experiences in Copenhagen because the best beer bars are to be found here, in the capital of Denmark. Quite surprisingly Copenhagen became the first city in Europe to embrace the new dogmas of beer from The States and so became the frontrunner for the continental beer revolution.

There are several explanations as to why Copenhagen became a first mover and successfully defends the position of being an attractive and recognized beer destination 20 years on.

It is impossible not to mention the twins. One of the twins, Mikkel Borg Bjergsø, together with Kristian Keller were the founders of Mikkeller in 2005. Today Mikkeller has 45 bars from Iceland over New York to Bangkok as well as a number of bars in Copenhagen such as e.g. Mikkeller Bar, Mikkeller & Friends and Warpigs.

Jeppe Jarnit Bjergsø, Mikkel’s twin, opened a beer shop with the obvious name Ølbutikken, the Beer Shop in Oehlenschlægersgade in Vesterbro the same year as the brewery Mikkeller was founded. The Beer Shop introduced the Copenhageners to the very best of the best beers, not least from Belgium and The States and back then, the Beer Shop was a rare gem not only in Copenhagen but also in Europe.

The two brothers’ well-known and competitive race towards the top, e.g. documented in the book “Beer Brothers” by Ramus Embargo from 2019, has practically pushed the entire industry forward and with it a number of highly recommendable bars, restaurants and other beer-related initiatives.

The import company Drikkeriget, Drinkers’ Realm, is a fine example and you cannot overestimate its importance. Jeppe Jarnit Bjergsø was a co-founder, and Drikkeriget’s specialty was and still is beer from the beer revolution’s home country The United States. The many new and interesting beers not only became talk of the town at the bars in Copenhagen, but also in several other countries to which Drikkeriget sold their beers.

The Danes were the first in Europe to adopt to the rating site Ratebeer, and the Copenhagener Jens Ungstrup has impressively rated more than 40,000 different beers. Today he is also beer manager at the beer bar Skaal, Cheers on Kultorvet. Some ratebeerians have a special nature and can come across as cavalier, pompous, dogmatic and difficult and it can be difficult to have a meaningful discussion with them. It is as if they do not enjoy the beer, they only rate it – and they do not go back to a beer already tasted. They have a lasersharp focus on products they haven’t tasted – yet, and are particularly attracted to extreme beers. I sometimes call them radicalized beer enthusiasts and you will find them at the bars where they go wild and senselessly rate away on Ratebeer and Untapped. However, their influence has been immense. They have very much changed what can be pulled from the taps and be found on the shelves in the beer bars.

The beer festivals have also had a significant impact on the development of beer in Copenhagen, the two most important are Ølfestivalen, the Beer Festival, which Danske Ølentusiaster, the association of Danish Beer Enthusiasts are responsible for, and MBCC, Mikkeller Beer Celebration Copenhagen, and, ehrm… well guess who is behind that?!

Come, Mingle With the Nerds

Once the steam has settled from the hype, festivals, radicalized beer enthusiasts and marketing lingo, there is only one right thing to do: Have some delicious beer at one of the inviting bars, and maybe take it to the next level and embark on a regular pub-crawl.

The chance to find excellent beer in Copenhagen has never been better and the variety on offer is practically stunning. As already pointed out there are more than 50 specialized beer bars around Copenhagen. I can pass on recommendations ad lib, but you can also let yourself be inspired from e.g. Ratebeer’s site for Copenhagen and the website godeoelsteder.dk. Let me give you three quick hints though:

Why not find your amber way to pearly heaven in Himmeriget, the Heaven, the bar on Ågade with all the good beers from Drikkeriget,

Drinkers’ Heaven where you can mingle with probably the city’s most radicalized and almost militant beer nerds.

Taphouse in Lavendelstræde with 61 taps is probably not the most inviting of bars, but it is large and has a selection of beers that can satisfy or challenge even the most discerning of palates.

You can also walk down memory and beer lane and order your beer at good old Ølbaren, the Beer Bar in Elmegade, which has stayed true to itself over the years and has not followed the trend and paid tribute to the modern hype. Here you can enjoy, taste, experience and rate not only extreme beers, you can also enjoy quiet, but extremely well-brewed, lager from Franconia, the region in Germany with the best beer in the country – and then it does not come much better!

Alternatively, book me for a guided tour – I shall be more than happy to help arrange speed dating between your taste buds and the best beer in Copenhagen.